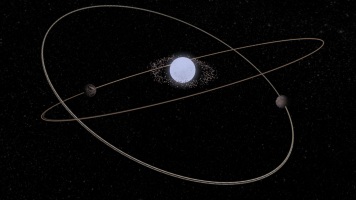 Inside the galaxy that the Changeable Worlds series takes place, one shining beacon of immeasurable energy exists. This star is known as Ramor (pronounced RAH-MORE) and is unique in the universe as a whole.

What makes Ramor unique is that despite being a brilliantly white sun, emitting incredible amounts of different energies, Ramor is also capable of thought – sentient and unquestionably intelligent. She is the creator of worlds – everything that orbits her in this planetary system was engineered by her. Ramor is what mere mortals may refer to as an actual god.

But she does not interact directly with life that has propagated around the few, composed worlds. This is played out by her Children of the Ethereal, also known as the Lightbearers. As Ramor is all-knowing and omnipresent throughout the galaxy, she watches her children, for her own amusement.

Surrounding Ramor is something similar to an asteroid belt – consisting of every known (and unknown) resource in the universe; it is this collection that completes the immense jigsaw for the creation of worlds and everything on them.

These building blocks are the very basis of environments, matter and even humanoid life. Through her own energies (and over considerable time), Ramor combines all of these elements to form the worlds that orbit her.

Outside of the orbit of the Piecestorm is the first world, home to the people of the Shaler and the world featured in Deliverance. It is a mostly temperate world, but with a deeply frozen northern ice cap and a burning volcanic southern cap. Pri orbits on an unusual axis, with the southern extremity more directly exposed to the sun.

Slightly further away from Pri – but not too far – is a more volatile world. Tagom’s atmosphere is thinner and is plagued with violent storms at almost all times. Its rock formations on the surface are constantly changing due to the planets highly volcanic landscape. But it is not devoid of life, and it is the world featured in Coalition.

Ramor is engineering a third world, after seeing her creation of Tagom as a bit of failure…

↑ Top of page
This website is in beta. Thanks for visiting!